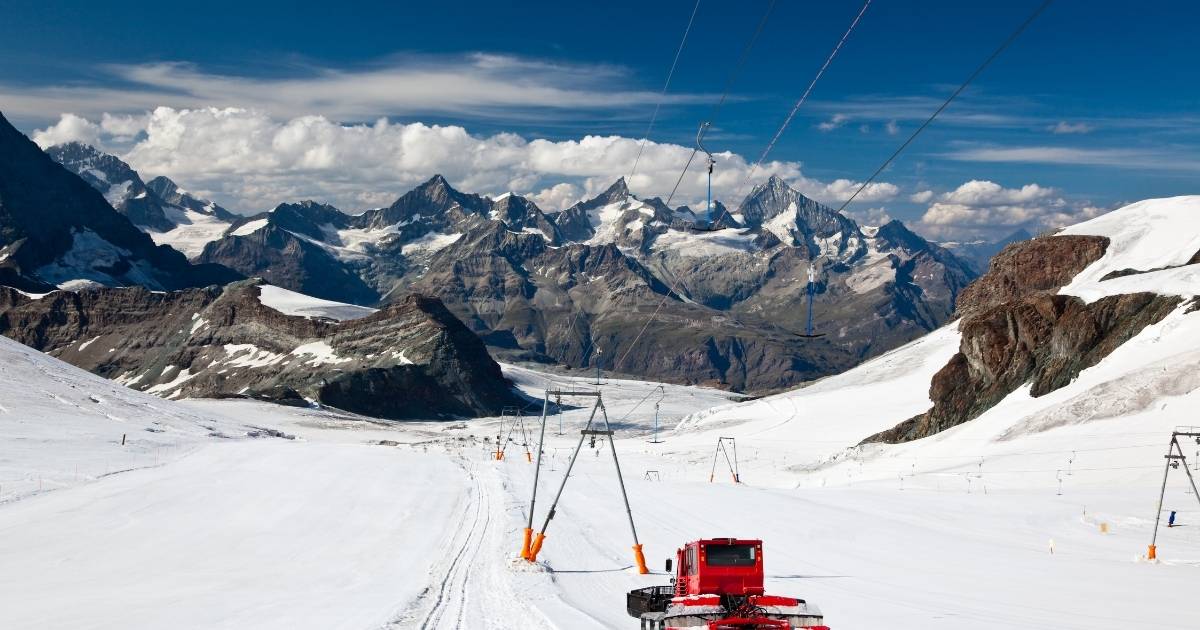 Skiing in September isn’t the easiest thing to do no matter where you are in the world. As it’s the end of the winter season in Oceania, there are ski resorts in Australia and New Zealand to consider. However, if you’re based in the United States or Europe then you might not want to make the long trip to these destinations.

We’re going to look at where is the best place to ski in September for those of us who hate these months between summer and winter. The chance to snowboard and ski mainly starts in November and depending on the resort ends in April/May. But, there are some resorts that are open in September too!

That’s why we’ve made this list of 10 ski resorts to try out in September. Keep reading to see which these are, but remember that the snowfall will differ each year.

The first place we recommend for skiing in September is the Hintertux Glacier in the Austrian state of Tyrol. It is actually Austria’s only year-round ski resort so you can even visit throughout the summer months such as July and August.

Hintertux Glacier is one of Europe’s most popular ski destinations for this reason. It is situated at an altitude of 3,250 meters which makes it perfect for skiing in September. The resort has a wide range of ski runs and pistes, as well as a number of chairlifts and cable cars. As well as skiing and snowboarding, Hintertux also offers a number of other activities such as hiking, mountaineering, and ice climbing.

There are runs to suit all skiing ability levels, so even if you’re still a novice you can go and learn when there aren’t as many people as during the peak months.

Next is another resort in Austria that allows you to ski in September and this is Sölden. As with Hintertux, it is located in the Tyrolean Alps, and the high altitude means that snow enthusiasts can also visit in the off-season.

Some will argue that this is the best time to visit this resort as you can enjoy stunning views of the snow-capped mountains without hordes of people. That said, the snow obviously isn’t the champagne powder that you’ll find in the winter months.

As you can see, Austria is one country that allows for longer ski seasons as even the resort Pitztal Glacier can offer amazing experiences in September. The scenery is simply breathtaking and the ski conditions are still good during this early month.

The Pitztal glacier is one of the largest glaciers in Austria at a whopping 3,440 meters! This is why it offers some of the best skiing in Europe. Most years, you’ll find that the ski season here starts in September and lasts until May, so you can enjoy skiing in Pitztal Glacier nearly all year round.

There are a variety of ski runs to suit all levels, from beginners to advanced skiers, so there is something for everyone.

The final Austrian ski resort to mention for where to go skiing in September is Kaunertal Glacier. It is one of Europe’s top ski destinations, and for good reason. The glacier is located high in the Alps, providing stunning views and excellent skiing conditions.

September is an ideal time to visit due to smaller crowds and the weather being cold but not like in deep winter. Kaunertal offers something for everyone, from beginner to expert, and there are plenty of ski schools and rental shops available. Although, you won’t find nearly as many ski instructors this time of year.

Another country that offers the ability to ski in September is Italy. Passo Stelvio is nestled high in the Alps on the border with Switzerland and is actually cheaper than going to Zermatt which we’ll mention below.

The picturesque setting and challenging slopes make it a mecca for skiers from all over the world, not just Europe. Although the ski season typically ends in April, there is sometimes snow at Passo Stelvio in September.

The temperature always drops in September which brings with it snow on the top of the mountains. You won’t find as much snow here as at some of the ski resorts in Austria, but it’s an option if you prefer skiing in Italy.

It may come as a surprise, but September is actually an excellent time to ski in Val Senales, Italy. The weather is still cool enough to keep the snow from melting, but it’s not so cold that you’ll be miserable on the slopes at the end of a long winter’s day.

Plus, because it’s off-season, you’ll find fewer crowds and generally more affordable prices. So, if you’re looking for a winter getaway that won’t break the bank, consider packing your skis and heading to Val Senales in September.

Zermatt in Switzerland like Hintertux Glacier in Austria is somewhere that you can ski all year round. This obviously means that the month of September is no different. The image at the top of this post is of Zermatt if you’re wanting to see what it’s like.

It is perched high in the mountains offering stunning views of some of Europe’s most iconic peaks, including the Matterhorn. The village is also home to a lively nightlife scene, with a number of bars and clubs to keep guests entertained after a long day on the slopes.

Although, these generally won’t be pumping like they are in the peak season. That’s because September is one of the quieter months in Zermatt, so visitors can enjoy all that the resort has to offer without the crowds.

Saas-Fee is another Swiss resort that offers people the chance to go skiing early in the season. It is a smaller resort compared to Zermatt but it still has a lot to offer even in this quiet month.

The snow can be dry and powdery depending on the weather and the runs are well-maintained. As it’s off-season, there are no crowds which allows you the chance to ski at your own pace. This makes it great for both beginner and experienced skiers.

September in Australia is the end of the winter there which makes it still a suitable month to go skiing. One resort that allows skiing in September is Thredbo in New South Wales.

The snow isn’t as plentiful as it is during the peak season, but there are still plenty of slopes to enjoy this late on in the Australian season.

New Zealand is known for its picturesque scenery, but did you know that it’s also a great place where to go skiing in September? The resort that we’re discussing here is Treble Cone which offers people visiting the last of the winter snow.

Treble Cone offers skiers some of the best slopes in the Southern Hemisphere so that’s a reason alone to go here for your early season skiing if you’re from another part of the world. With a variety of trails to choose from, there’s something for everyone.